Come on down to the thunder dome this Friday for some crazy action. If ya know where it is, ya know where it is. But you certainly won’t know what hit ya if you make it down. Rumor has it that TWO radio and/or podcast hosts for poker will be there, I’ll be there, and there’s Mountain Dew for days.* PLO8** has never seemed so mean at The Thunderbarn ’16.

***but the Illuminati is proves a decent scapegoat. Or God. Anything unprovable works wonders. 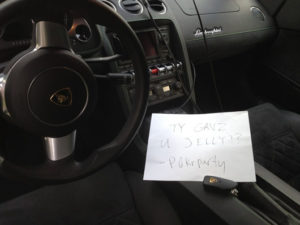 Makes my day every time that someone would fit the demographic of a) railing my matches online b) being a big enough part of twoplustwo to go out of his way to share this joke with everyone and most importantly c) ALSO owns a Lamborghini. Own that niche dawg you deserve it. Shout out to the pear.

Shoutout to all the pear 😂 https://t.co/mRyp9aXv9f

Here’s My Story (part of it anyway)…

Let’s just skip to the part where I barely make $1,000,000 seven days before my 19th birthday before losing half of it back in those seven days and a whole 1/4 of it ON my birthday. Going broke is a strength in the game of poker and I’ve gone broke more times than anyone else alive – and by that I mean 6 figures+ to broke over 50 times.

To people outside of poker this may seem relatively insane and yeah, maybe it’s a bit peculiar, but in order to really MASTER this game you gotta be all heart and not afraid for it to hurt. And holy shit does it hurt. When I was 19 I was banned for life from Pokerstars because of a violation of the Terms of Service I committed which at the time was just making a switch from grey area-but still ok to not-ok-definitely-not. Say hello to your changing of the tides poster boy! So I had to play basically in secret for a really long time or on random sites or play live, slow, boring-ass monotonous poker (more on live poker later though).

I thought this was as bad as it got but then it turned out that the 2nd biggest online poker site, Full Tilt Poker, was really just a very large and pretty poorly orchestrated ponzi scheme when you really take a look at the details. But I’ve talked enough details to fill a lifetime or two of unfortunate events. I was a millionaire on paper while the government held the funds in escrow and I lived at my parents house for THREE YEARS before they released the money in 2014. I was 23 turning 24 and had lived with my parents through my “prime” 20’s years. I love my parents and they’re so supportive and amazing in the way that they didn’t even flinch at my needing assistance there, but what 21 year old who accomplishes mastery of their craft to the tune of seven-figures wants to celebrate by spending the next three years living in the same place they grew up their whole life around the same old places and people?

I had and still have many friends back home but I dropped out of highschool when I was 18 with two weeks left in the semester because there’s just no way for an 18 year old to give two shits about graduating highschool with a millionaire’s bankroll and the confidence of a billionaire…not the best attitude to take on the world with. I did though, take on the world that is. And I did ok at it – if you count being owed over $1.2 million from “friends” and losing another $1.5 million in throwing $10,000 money darts at the dartboard with a blind fold on every month or so to the turn of 5x-10x so $50k-$100k.

It’s funny thinking back to this stuff because right now I’m in a pretty interesting financial situation, if you consider having a wardrobe that is 10x the value of your liquid net worth interesting. I find it disgusting I really do but, impermanence and non-attachment have to reign over my feelings towards that in this instance. There are a million and a half ways to cause yourself pain by drudging up past and piss poor decisions, so I simply choose not to (on the days I have full control). Some days are harder than others.

Other days, you get really unlucky when somebody steals your backpack only to find out that they actually stole $20,000 worth of clothes whether they knew it or not. And YOURS TRULY knows how to cover his ass with insurance. This can also serve as a formal “on the record” statement for that having actually happened although the police report will follow.

Those are some bits and pieces of my past. Here’s a link to some of my exploits back in the good ol’ days of treating $100’s like pennies http://bit.ly/1RcGKGg. There is no drug like poker to keep you up for 36 hours straight. There’s also no drug like speed to do the same, an as a result of living a high-flying wannabe-rock-and-roll lifestyle was being diagnosed with lupus at years old, about to turn 20 and traveling in Amsterdam with my good buddy Jon. While I was in the hospital about 35,000 euros were stolen from my hotel room as well.

I spent a month there. My mom even flew out to hang with me and the rest of the crew in my wing which happened to be hospice care so as you can probably guess I’ve heard my fair share of involuntary bowel movements and the methane smell-surprise that follows. For those that aren’t up on their somewhat-rare autoimmune diseases, that is what lupus is. However, for a 19 year old white male the odds of me developing lupus were around 2-3 anti-mega millions wins in a row. It just doesn’t happen. When my doctor called me to tell me what my diagnoses was after months of not knowing I was pretty confused verging on devastate then leaning back towards “do I care” mode. She told me this is not something I could have given myself through lifestyle choices such as drugs or consecutive nights with no sleep (84 hour session once at the Rio in Las Vegas).

This was very reassuring to hear although I still felt like my life had completely changed in some direction that I would eventually and very slowly find out to where. About two years into my diagnoses I was going strong with my new and AMPLIFIED “fuck it” take on life and living. Then came the truth bomb: epigenetics. The existence of this concept proved my suspicions all along and I was indeed the cause of my disease. My lifestyle and behaviors flipped on the crappy genes which started the Lupus autoimmune machine of…what exactly? We know so much about all the other autoimmune diseases and many have much worse, chronic symptoms. I fear it unfortunately has too ambiguous a list of symptoms and treatments that major drug funding will not likely be devoted to this illness. And I couldn’t be happier about that.

I’ll save my beef with big pharma for another day, but some rants to them and Monsanto as well as US Sugar on twitter can be found at twitter.com/chipsandgiggles which was my real-person twitter before I decided to just come out and be pokrparty, on the official, and essentially give up rights forever at any sort of appeal to my Pokerstars account. They can keep it. Soon, the once-great online poker mega-site will only be worth whatever Betfair or 888Holdings will pay for them. They’d be lucky to get over a billion and if the did manage to even get $2 billion, they can officially claim the largest downswing in poker history ($2.9 billion).

I really enjoy meeting peopl! I spent so long in isolation mastering a zero sum, uber competitive game that maybe it’s just an over-compensation mechanism. OR, I could just be a normal 25 year old in a city full of super interesting people and want to get out there, out of the bubble that is our precious poker world, and find my place out there. I believe I can contribute so much to my community and hopefully one day to the world.

I just have to beat back that bitch Lupus, re-acquire some standard life skills that all college grads would leave school with and I never learned, and be fearless – just like at the tables. I’m working my way back into poker slowly but surely, and will have some pretty…contrarian content coming out in due time. For now, you can catch me on twitter @pokrparty where I pay someone to tweet interesting shit for me until my own is ready. There’s nothing wrong with the videos and quotes with me oftentimes surprised at myself feeling inspired by them. They do a great job over there at SocialBee.io and it only gets better the more you get involved yourself (something I have yet to fully experience). Ovi does a great job personalizing your dashboard if you were to utilize it – and I’m just giving a shout out because they’re relatively new and they do a damn good job there’s no money involved only dopeness.

I am highly motivated to make as little money as possible from any of my future poker work when it comes to content. It will be cool to even release an idea into the wild and see what happens to it. Will it get rejected, adopted, or even better, iterated upon and made better. If people think the big bet games are anywhere near figured out to their most nuanced they should reconsider their stance.

As for coaching, whether it be groups, private coaching (usually in the high $100’s of dollars), free roll %’s of my action, you name it – and I’ll give it away. I believe everyone in the world deserves to benefit from what a poker education imparts on your psyche, your mental model of the world and any problem solving that comes your way. The day will come when a very wise president of the United States appoints poker players for every one of his cabinet positions. We already know that @NateSilver538 will be handling big data since he’s been predicting almost everything since leaving poker a few years back and crushing it. He’s only one of the MANY rising stars we will start to see emerge out of the dying poker economy in search of greener pastures.

Personally, as much as I’d love to make major change in the world and believe I can do it, at this point in my life with all the negative people-experiences I’ve had…I’ll settle for a few close friends I can trust and some passion projects we can work on together. Computer science looks fun… : ) Time to take this online learning for a test drive!

See ya’ll on the other side,